Pyramids provide a good image of tiered activity.  In 2015, I wrote a diary about a Security Operations Center (SOC) analyst pyramid of activity SOC analysts will encounter when monitoring their networks for malicious network traffic.

But in recent months, I’ve used a pyramid to show tiered responsibilities under a mature information security (infosec) program.  Today’s diary provides my view of infosec as a tiered purple pyramid.

However, blue and red teams both serve the same objective: protecting our information technology (IT) assets.  We can view blue and red team functions within the combined model of a purple infosec pyramid. 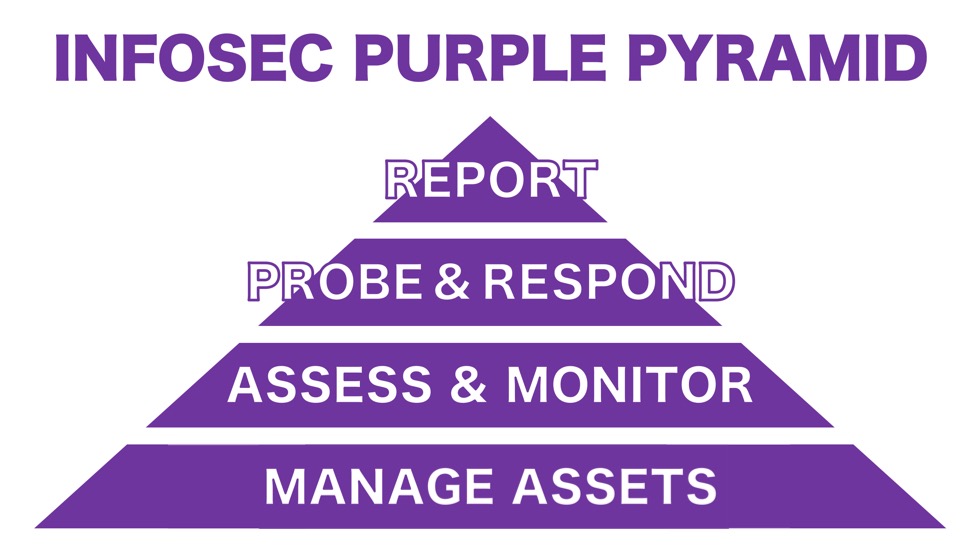 Shown above:  An infosec purple pyramid.

The base of this pyramid covers all tasks for managing your IT assets.  These functions include:

These basic IT functions are essential to supporting the remaining tiers of an infosec pyramid.  Without inventory management, we cannot properly secure our infrastructure, because we don’t fully understand everything on our network.  Access controls are also critical to ensure only properly-authorized people are utilizing our IT assets.  Some of these roles may not be handled by security personnel, but they directly affect the security of our network.

This tier of the pyramid involves both blue and red team functions.  Red team members assess network security through vulnerability scans, while blue team members monitor the network for intrusions or other malicious activity.  These assessments should be periodic and relatively frequent.  Monitoring should be constant, with near-real-time detection and analysis of suspicious activity.

When vulnerabilities are discovered through assessments, red team members probe to determine how easy they are to exploit.  If blue team monitoring reveals malicious activity, security personnel must respond.  This tier consists of activity like penetration tests and incident response procedures.

The top tier of the purple pyramid is based on reporting.  Red team members send the results of assessments and penetration tests to managers and other decision makers.  Blue team members report on malicious activity and how the issues were resolved.  Decision makers use this data to adjust processes and procedures in lower tiers of the pyramid.  This should provide a continual cycle of feedback designed to improve an organization’s security.

Blue and red team functions can mislead people into thinking they are opposing roles working against each other.  However, these functions are better seen as a combined color with the same objective o protecting our IT assets.  When viewed within the tiered model of a purple infosec pyramid, we can better understand how blue and red teams work together to provide an effective defense.

This month we got patches for 74 vulnerabilities total. From those, 16 are critical and 2 have been exploited in the wild.

Both exploited vulnerabilities (CVE-2019-0859 and CVE-2019-0803) are related to Win32k component which fails to properly handle objects in memory and may permit a local attacker to elevate privileges and execute arbitrary code in kernel mode.

It is also worth mentioning a remote code execution vulnerability in GDI+ (Windows Graphics Device Interface) which affects the EMF (Enhanced MetaFile) parser. An attacker could exploit this vulnerability by convincing users to open specially crafted EML files in scenarios such as a file hosted on a web server or an e-mail attachment. Multiple Microsoft programs, especially Office suite, uses GDI+ component.