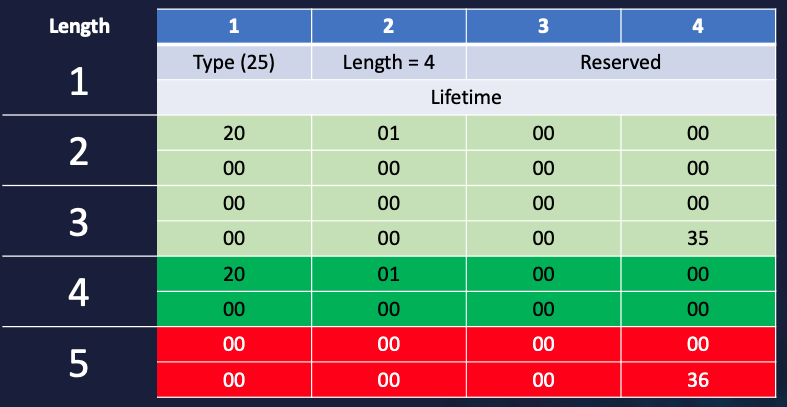 One vulnerability that got defenders’ (including mine) attention this week was CVE-2020-16898. The vulnerability, sometimes called “Bad Neighbor,” can be used to execute arbitrary code on a Windows system. To exploit the vulnerability, an attacker has to send a crafted ICMPv6 router advertisement.

What Are Router Advertisements?

How are recursive DNS servers (RDNSS) encoded in router advertisements?

As typical for IPv6, the length is indicated in 8-byte increments. So a length of “1” indicates that our option is 8 bytes long. The initial fields (Type, Length, Reserved, Lifetime) are exactly 8 bytes long. Each IP address is 16 bytes long.

For one IP address, our length would be “3”. Each additional IP address adds another “2” (2 x 8 Bytes). As a result, the length has to be always odd.

The vulnerability is triggered if the length is even, and larger then 3. For example, consider this packet with a length of “4”:

The last eight bytes of the second IP address are no longer included in the length. And this is exactly where Windows gets confused. Wireshark gets a bit confusing, as well:

Wireshark still displays both IP addresses but also recognizes that there is data beyond the option length.

How bad is it?

It is bad in that this allows arbitrary code execution. But an attacker has to be able to send the packet from the victim’s network. Even an exposed host can not be attacked from “across the internet,” only within a subnet. An attacker will also have to overcome anti-exploit features in Windows 10 (address layout randomization and such), requiring a second information leakage, vulnerability, and exploit.

What can I do?

Patching is probably the simplest, most straightforward solution, which is least likely to cause problems. Other options: